By Ryan Prior, CNN

Strikes set to paralyze France as protesters take to streets

North Korea’s message to US: Choose your Christmas present

This woman is going to jail for lying on her resume

How Scotland could decide the UK election

What you should know about the Nobel Prize

Inside the Liberal Democrats’ effort to cancel Brexit

Suspects in gang rape and murder killed in police shootout

Bushfire rips through treetops near Sydney

More than 100 graves defaced in Jewish cemetery in France

Strikes set to paralyze France as protesters take to streets

North Korea’s message to US: Choose your Christmas present

This woman is going to jail for lying on her resume

How Scotland could decide the UK election

What you should know about the Nobel Prize

Inside the Liberal Democrats’ effort to cancel Brexit

Suspects in gang rape and murder killed in police shootout

Bushfire rips through treetops near Sydney

More than 100 graves defaced in Jewish cemetery in France

(CNN)Physics centers essentially on four forces that control our known, visible universe, governing everything from the production of heat in the sun to the way your laptop works. They are gravity, electromagnetism, the weak nuclear force, and the strong force. 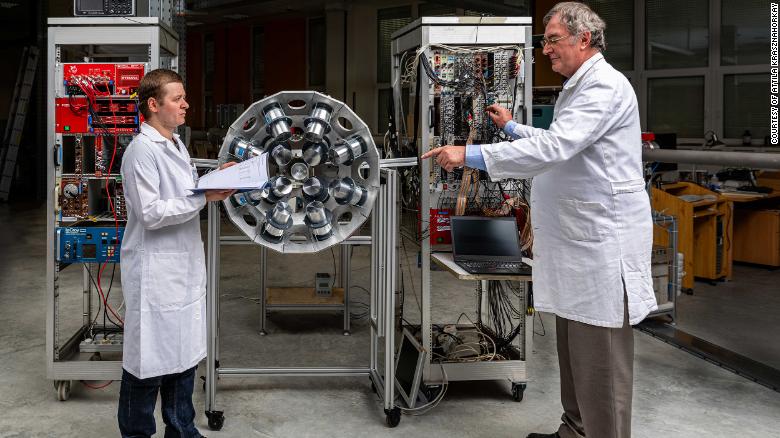 Physicist Attila Krasznahorkay, right, works with a fellow researcher at the Institute for Nuclear Research at the Hungarian Academy of Sciences.
New research may be leading us closer to one more.
Scientists at the Institute for Nuclear Research at the Hungarian Academy of Sciences (Atomki) have posted findings showing what could be an example of that fifth force at work.
The scientists were closely watching how an excited helium atom emitted light as it decayed. The particles split at an unusual angle — 115 degrees — which couldn’t be explained by known physics.
The study’s lead scientist, Attila Krasznahorkay, told CNN that this was the second time his team had detected a new particle, which they call X17, because they calculated its mass at 17 megaelectronvolts.
“X17 could be a particle, which connects our visible world with the dark matter,” he said in an email.
Jonathan Feng, a professor of physics and astronomy at the University of California at Irvine told CNN he’s been following the Hungarian team’s work for years, and believes its research is shaping up to be a game changer.
If these results can be replicated, “this would be a no-brainer Nobel Prize,” he said.

Hungarian scientists are building on 2016 results

Three years ago, the Hungarian researchers published a similar paper in Physical Review Letters, one of the most prestigious journals in physics.
The nuclear physics experimental team had been studying another isotope, beryllium-8, as it decays down to a ground state. They saw electrons and positrons splitting off from the atom at unusual angles.
Those findings, which showed particles coming off beryllium-8 at around a 140-degree angle, were strange and new.
“We introduced such a new particle, which nobody saw before, and [whose] existence could not be understood by the widely accepted ‘Standard Model’ of particle physics, so it faced scrutiny,” Krasznahorkay said in an email.
The findings by Krasznahorkay’s team didn’t get much attention at first, but they raised Feng’s eyebrows. He said he “didn’t want to leave potentially revolutionary results just sitting on the table.”

Physicists in California developed a theory to explain the unusual results

In short, it could change physics as we know it, or it could have just been a simple lab error.
“Some people said they screwed up,” Feng said.
But he believed the Hungarians were for real. His research group published a paper on the heels of the Hungarians’ 2016 work, laying out a theory to observe what Krasznahorkay’s experimental team had seen.
They referred to this unseen fifth force in action as a “protophobic force,” meaning that it was as though the particles were “afraid of protons.”
Meanwhile, nuclear physicists around the world set to work looking for errors in the Hungarians’ work, and have come up empty-handed over the past few years.
“Some very well-known nuclear physicists have done that exercise,” Feng said.
The numbers seemed to add up, and no one could find ways their equipment was calibrated incorrectly.
And Feng said his own team was comparing the Hungarian experiments “with every other experiment that’s been done in the history of physics.”
The only way to explain X17 was a hitherto undetected “fifth force.”

The findings point toward the Holy Grail of physics

To move their breakthrough idea from 2016 forward, the Hungarians would need to repeat the results again. That’s exactly what their 2019 results do.
Feng says that, barring experimental error, there was only a one-in-a-trillion chance that the results were caused by anything other than the X17 particle, and this new fifth force.
He added that if another research group could repeat these results with a third type of atom in addition to beryllium and helium, “that would blow the cover off this thing.”
Experimental research groups have already been contacting him, hungry to do that.
More sightings of the fifth force could lead to scientists settling on a specific name for it, understanding its workings more deeply, and developing practical applications for how to harness its power.
They’re leading us closer to what’s considered the Holy Grail in physics, which Albert Einstein had pursued but never achieved. Physicists hope to create a “unified field theory,” which would coherently explain all cosmic forces from the formation of galaxies down to the quirks of quarks.
But the universe isn’t giving up its secrets easily.
“There’s no reason to stop at the fifth,” Feng said. “There could be a sixth, seventh, and eighth force.”
Posted in Uncategorized