‘It is perhaps a sense of intellectual inadequacy, of an ingrained inferiority complex born of the years when the BJP languished in the margins of Indian politics and society that, when faced with the soaring ideas about Indian pluralism, the Hindutva camp turns its face so resolutely against Nehru,’ says Amulya Ganguli. Illustration: Dominic Xavier/Rediff.com 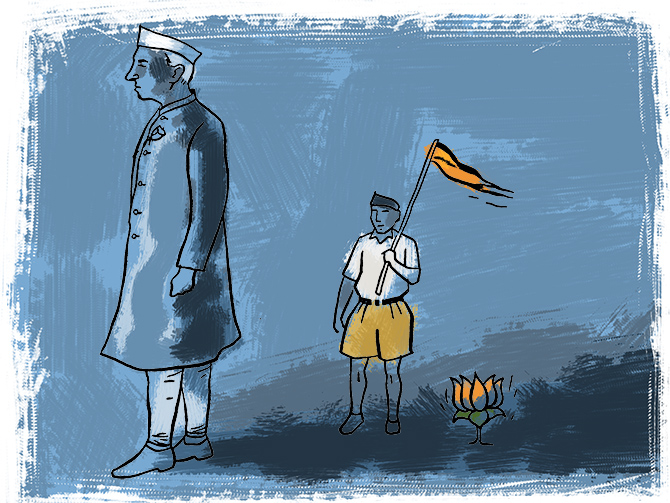 On par with the saffron brotherhood’s animus towards Muslims is its dislike of Jawaharlal Nehru. As much was clear from, first, the curious omission of India’s first prime minister in Ram Nath Kovind’s first speech as President  when he lauded, among others, Deen Dayal Upadhyay of whom few Indians outside the Sangh Parivar are aware.

The second indication of the Parivar’s antipathy toward Nehru was in Prime Minister Narendra D Modi’s recent nearly two-hour-long speech in Parliament in which he refused to endorse the widely held view of Nehru’s seminal role in the establishment of democracy in post-1947 India. According to Modi, the so-called architect of modern India cannot be credited with planting the roots of democracy in the country since the Indian polity was known for its democratic credentials since the time of Lord Buddha.

The reason why Nehru is being excoriated by those engaged in rewriting Indian history is probably partly psychological (of which more later) and partly political because he is the head of the dynasty which has ruled the country for several decades — from 1947 to 1964 when Nehru was the PM, from 1966 to 1977 when his daughter, Indira, was the PM, and again from 1980 to 1989 when, first, Indira, and then her son, Rajiv, were prime ministers. Since the dynasty and the Congress were the primary targets of Modi’s speech, it was obvious that he regarded them as the main stumbling blocks before the BJP’s avowed goal of ushering in a Congress-mukt Bharat.

And what can be a better way to denigrate the dynasty (and, therefore, the party) than to castigate its foremost luminary? However, it isn’t only now that the saffronites are trying to turn Nehru into an unperson — the celebrated Orwellian word for those whom the Communists sought to airbrush out of history. The disparagement of Nehru by the Hindutva brigade began when it claimed that Nehru’s grandfather and Motilal’s father Gangadhar was a Muslim named Ghiasuddin Ghazi who changed his name to Ganga Dhar ‘to escape British clutches’ after the 1857 uprising.

The charge about the dynasty’s putative Muslim roots in blogs which circulate in cyberspace inhabited by saffronities is in keeping with the Parivar’s antagonism towards Muslims (and Christian), dating back to the two Hindutva heroes — Vinayak D Savarkar, who called them aliens, and Madhav S Golwalkar who categorised them as internal enemies Nos 1 and 2. But that is not the only explanation why Nehru is being either ignored or attacked. There is also a psychological factor. It is that Nehru is the exact opposite of what the average RSS/BJP type represents by being an erudite, urbane, cosmopolitan patrician and, above all, a believer in India’s multicultural entity. As he ruefully said at the time of the Partition riots, ‘the history of India has been one of assimilation and synthesis of the various elements that have come in… it is perhaps because we tried to go against the trend of the country’s history that we are faced with this (the communal carnage).’ Tagore, too, spoke of how the Scythians, Huns, Pathans and Mughals have merged into one among the multitudes on the shores of India’s oceans. According to Salman Rushdie, India’s ‘selfhood is so capacious, so elastic that it manages to accommodate one billion kinds of difference… it works because the individual sees his own nature writ large in the nature of the State.’

To the RSS/BJP, this togetherness is anathema. It is a travesty of their concept of Bharat Mata, who is their deity of a land of, by and for Hindus. Their view of Indian society, therefore, is one of unending conflict between the Hindus and Muslims from medieval times to the present when, as BJP MP Vinay Katiyar, said recently, the Muslims have no right to live in India as they have already carved out of the subcontinent two countries for themselves — Pakistan and Bangladesh. There is no way, therefore, for the present rulers in Delhi to accept Nehru who was the main proponent of India’s composite culture, which, as he believes, has evolved over the centuries when the Hindus and Muslims lived cheek by jowl in the country along with the followers of other religions — Sikhs, Jains, Christians, Jews, Zoroastrians, et al.

It is perhaps a sense of intellectual inadequacy, of an ingrained inferiority complex born of the years when the BJP languished in the margins of Indian politics and society that, when faced with the soaring ideas about Indian pluralism, the Hindutva camp turns its face so resolutely against Nehru, ignoring the description of one of their own stalwarts, Atal Bihari Vajpayee, of the present ‘unperson’ as Bharat Mata’s ‘favourite prince’. Amulya Ganguli is a writer on current affairs.