Classified Evidence: US Soldiers Raped Boys In Front Of Their Mothers

Classified Evidence: US Soldiers Raped Boys In Front Of Their Mothers

(TheAntiMedia) According to a number of global mainstream media sources, the Pentagon is covering up a disturbing video that was never made public with the rest of the recent torture report.

According to various well respected journalists, including Seymour Hersh, the appalling video was recorded at Abu Ghraib, the notorious US torture dungeon in Iraq that made headlines roughly a decade ago, when the inhumane tactics being used at the prison were exposed.

Sadly, it seems that the evidence released years ago was only scratching the surface.

While the video has remained under wraps thus far, Hersh says it is only a matter of time before it comes out.

Giving a speech at the ACLU last week after the senate torture report was initially released, Hersh gave some insight into what was on the Pentagon’s secret tape.

In the most revealing portion of his speech he said that: 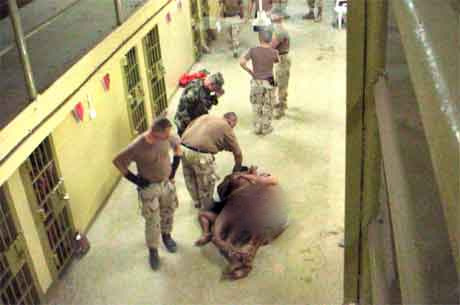 “Debating about it, ummm … Some of the worst things that happened you don’t know about, okay? Videos, um, there are women there. Some of you may have read that they were passing letters out, communications out to their men. This is at Abu Ghraib … The women were passing messages out saying ‘Please come and kill me, because of what’s happened’ and basically what happened is that those women who were arrested with young boys, children in cases that have been recorded. The boys were sodomized with the cameras rolling. And the worst above all of that is the soundtrack of the boys shrieking that your government has. They are in total terror. It’s going to come out.”

“It’s impossible to say to yourself how did we get there? Who are we? Who are these people that sent us there? When I did My Lai I was very troubled like anybody in his right mind would be about what happened. I ended up in something I wrote saying in the end I said that the people who did the killing were as much victims as the people they killed because of the scars they had, I can tell you some of the personal stories by some of the people who were in these units witnessed this. I can also tell you written complaints were made to the highest officers and so we’re dealing with a enormous massive amount of criminal wrongdoing that was covered up at the highest command out there and higher, and we have to get to it and we will. We will. You know there’s enough out there, they can’t (Applause). …. So it’s going to be an interesting election year.”

Put into context with another speech that Hersh gave earlier this year, it becomes clear that the women who witnessed these young boys being raped were actually their mothers.

At a speech in Chicago this past June Hersh was quoted as saying:

“You haven’t begun to see evil… horrible things done to children of women prisoners, as the cameras run.”

Other stories at the London Guardian also talked of young Iraqi detainees getting violently raped by US soldiers.

Ten years ago when the initial Abu Ghraib scandal was in the news, the Guardian published the testimony of an Abu Ghraib detainee who allegedly witnessed one of these brutal attacks.

Former detainee Kasim Hilas said in their testimony that:

“I saw [name blacked out] fucking a kid, his age would be about 15-18 years. The kid was hurting very bad and they covered all the doors with sheets. Then when I heard the screaming I climbed the door because on top it wasn’t covered and I saw [blacked out], who was wearing the military uniform putting his dick in the little kid’s ass, I couldn’t see the face of the kid because his face wasn’t in front of the door. And the female soldier was taking pictures.”

Now, over a decade later the evidence of these events are beginning to surface, but the Department of Defense is still doing their best to keep it under the radar. That is why now more than ever, it is important to keep the pressure on and force the release of this evidence, while the torture report is fresh in the minds of the general population.

This article is free and open source. You have permission to republish this article under a Creative Commons license with attribution to the author and TheAntiMedia.org. Follow us on Facebook and Twitter to receive our latest articles.

John Vibes is an author, researcher and investigative journalist who takes a special interest in the counter culture and the drug war. In addition to his writing and activist work he is also the owner of a successful music promotion company. In 2013, he became one of the organizers of the Free Your Mind Conference, which features top caliber speakers and whistle-blowers from all over the world. You can contact him and stay connected to his work at his Facebook page. You can find his 65 chapter Book entitled “Alchemy of the Timeless Renaissance” at bookpatch.com.