Beards may contain bacteria which could potentially be developed into new antibiotics, a study has found.Researchers found that clean-shaven men were actually more likely to harbour infection-causing bacteria resistant to antibiotics when compared to bearded men.The study, published in the Journal of Hospital Infection, tested swabs from the faces of 408 hospital staff with and without facial hair.According to the results, clean-shaven men are more than three times as likely to be carrying methicillin-resistant staph auerus (MRSA) on their cheeks as their bearded counterparts.Clean-shaven men were also more than 10 per cent more likely to have colonies of Staphylococcus aureus on their faces, a bacterium that causes skin and respiratory infections, and food poisoning.Researchers suggest this may be due to micro-abrasians caused by shaving in the skin, “which may support bacterial colonisation and proliferation”.The report reads: “Overall, colonisation is similar in male healthcare workers with and without facial hair, however, certain bacterial species were more prevalent in workers without facial hair.”Dr Adam Roberts, a microbiologist from University College London, was able to grow over 100 different bacteria from beard swab samples in a separate analysis.Among the petri dishes, he found the presence of a microbe that appeared to be killing the other bacteria.Dr Roberts isolated the microbe and tested it against a form of E. coli that causes urinary tract infections, and found the microbes killed the bacterium efficiently.

The next Movember, which is also known as No-Shave November, is still several months away. However, this does not mean that you should switch to a clean-shaven look, especially if you are interested in attracting the attention of a potential mate.

A scientific study conducted by the Official Journal of the Human Behavior and Evolution Society also indicated that specific types of facial hair have a major impact on how others perceive individuals with a beard.

Therefore, depending on your personal preferences, you might want to grow ayeard or stick with thick stubble.

So what type of beard is right for your lifestyle? That depends on which qualities you want to be associated with: Men who are clean-shaven or who have a light amount of stubble were rated as being the least attractive by women and men.

Additionally, it is interesting to note that a heterosexual woman’s interest in masculine looking men becomes more pronounced during the ovulation portion of her fertility cycle. In other words, if you and your female spouse or partner have been trying to conceive or are dealing with intimacy issues, it could be beneficial to grow your facial hair out.

After all, increasing your level of attractiveness in your partner’s eyes is definitely a good way to boost their sex drive.

There are also scientifically proven health benefits associated with having a beard. According to researchers from the University of Southern Queensland, beards are able to block up to 95 percent of the sun’s harmful UV rays, and this will reduce your risk of contracting skin cancer.

Men who suffer from asthma could experience some relief from symptoms by growing a beard because this will help prevent dust and pollen from getting into their respiratory system. As an added bonus, a full beard will keep your skin looking healthier and more youthful.

It sounds like it is time to toss out your razors, gentlemen, but make sure that you take steps to keep your beard in good shape so that you can look your best!

The role of facial hair in women’s perceptions of men’s attractiveness, health, masculinity and parenting abilities

Facial hair strongly influences people’s judgments of men’s socio-sexual attributes. However, the nature of these judgments is often contradictory. The levels of intermediate facial hair growth presented to raters and the stage of female raters’ menstrual cycles might have influenced past findings. We quantified men’s and women’s judgments of attractiveness, health, masculinity and parenting abilities for photographs of men who were clean-shaven, lightly or heavily stubbled and fully bearded. We also tested the effect of the menstrual cycle and hormonal contraceptive use on women’s ratings. Women judged faces with heavy stubble as most attractive and heavy beards, light stubble and clean-shaven faces as similarly less attractive. In contrast, men rated full beards and heavy stubble as most attractive, followed closely by clean-shaven and light stubble as least attractive. Men and women rated full beards highest for parenting ability and healthiness. Masculinity ratings increased linearly as facial hair increased, and this effect was more pronounced in women in the fertile phase of the menstrual cycle, although attractiveness ratings did not differ according to fertility. Our findings confirm that beardedness affects judgments of male socio-sexual attributes and suggest that an intermediate level of beardedness is most attractive while full-bearded men may be perceived as better fathers who could protect and invest in offspring.

I didn’t even know I thought beards are more attractive until my boyfriend shaved his facial hair for Halloween. He looked so different, I felt I was cheating on him with his clean-shaven twin. And I dated that twin for over a month while we waited for his beard to grow back. (And you know, that waiting is the worst part — dealing with the itchy, in-between beard phase.) But we should commend our boyfriends’ patience — Men’s Journal saysthere’s a lot to maintaining a beard: “Trimming, shaping, fading, cleaning, combing, and conditioning is all part of the game and changes depending on what style you want and type of facial hair you were born with.”

Thinking back to men before that boyfriend, I realized more were bearded than not. Maybe it was in my psyche from when I was growing up, surrounded by uncles who had beards in Chicago — perhaps as a result of the near-arctic winters and their effort to keep warm? Or maybe it was an influence of where I live now, in L.A., and the prevalence of hipsters and bearded men there — particularly in trendy neighborhoods like Silverlake and Venice — versus other parts of the country? Or perhaps the surge of bearded celebrities seeped into my head, like George Clooney, Ben Affleck, and Zach Galifianakis?

Celebrity or not, beards can change a man’s look nearly overnight (well, quite a few overnights to get the desired result, depending on what you want that to be).

No matter what type of beard your boyfriend may have, we can all agree that beards (seemingly) change the man. You can even check out this dating site,Bristlr, that caters to men with beards and the people who love them. My reasons for loving bearded boyfriends include:

Maybe this goes back to what I said about being raised among a lot of bearded men, like a Freudian thing. I think we women who like men with beards are not anti-clean-shaven men, we just prefer bearded ones, like these on Instagram. When you look at the men sans a beard versus with a beard, the latter makes them look more mature and someone who’d win an onscreen fight against their non-bearded nemesis. Beards make men look years older, in a very appealing way.

2. Beards Are For A Good Cause.

Aside from beards looking good, they’re also for a great cause. Movembertook our men’s beards away while men focused on growing moustaches (and sometimes beards), but No-Shave November brought them back. Movember raises money for prostate or testicular cancer while No-Shave November raises money for cancer, as well, and partnered with the American Cancer Society in 2013. They figure that if men grow out their beards for the month of November instead of spending money going to the barber, they can donate that money toward cancer research instead.

3. Beards Are Seductive (And Soft).

If you don’t believe me, have the guy you’re dating grow one. A friend of mine was practically the spokeswoman for anti-bearded men and happy her boyfriend was clean-shaven. But when he decided to participate in No-Shave November, she dreaded the bearded result, then grew to love it (and he still has the beard today). Just check out these before and after photos of men with beards and decide for yourself which look you prefer.

4. Beards Are Part Of Our History. 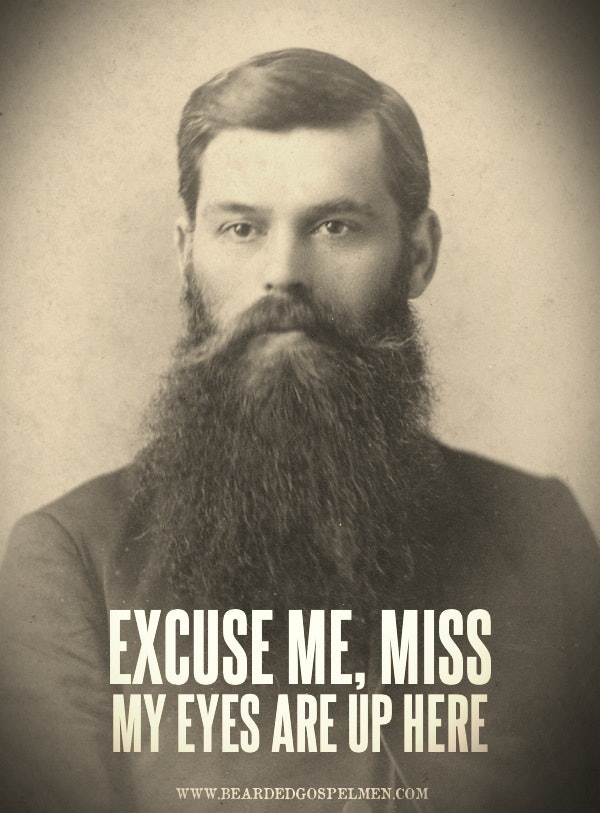 According to Live Science, the popularity of beards and facial hair has varied over time, sideburns being most prevalent in 1853, sideburns with mustaches in 1877, and solely beards in 1892. Facial hair is so popular that there’s even an annual World Beard and Moustache Championship (last year’s was in Portland and this year’s is in Austria). Judging criteria includes “…which contestant’s facial hair best enhances his overall appearance, style, and personality. In the freestyle categories the judges will be asked to consider originality and creativity as well.” There are 18 categories within three primary categories, complete with pictures: Moustaches, Partial Beards, and Full Beards. One of the official rules states: “artificial facial hair is not permitted.”

Artificial facial hair? Yep, beards are so hot right now that some people are spending around $3,000-7,000 on beard transplants (depending on how much hair they want filled in) — and you may not even realize it. Dr. Jeffrey Epstein, a facial plastic surgeon in New York, has been doing them for over 12 years. He went from doing a handful ten years ago to a few a week as of last year (in Midtown East and Miami).

“Our findings confirm that beardedness affects judgments of male socio-sexual attributes and suggest that an intermediate level of beardedness is most attractive while full-bearded men may be perceived as better fathers who could protect and invest in offspring.”