While watching news on Times Now I saw the news scrolls related to Mangalore and the name “Naik” appeared. I was confirmed, this news is about Dr. Zakir Naik which was related to the hashtag #CommunalDoublegame, the topic of Arnab Goswami’s Debate 1 (on 30th Dec 2015). The hashtag clearly displayed the intention of Arnab Goswami and his stance against Zakir Naik. But in the debate he crossed the expectations and painted Zakir Naik and other communalists with the same brush. No doubt he will speak against Zakir Naik but I thought he may do it in a diplomatic way – following the ethics of journalism.

With half-baked research, Arnab laid various severe allegations against Dr. Zakir Naik that are absurd, ill-intended and malicious in nature. He has crossed all the levels in degrading Dr. Zakir Naik which he think he has done a wonderful thing. If he was truthful in his debate, then he would have invited people from IRF who knows Dr. Zakir Naik closely; or at least those who organize or listen to Dr. Zakir Naik’s speeches regularly. The cowardness of Arnab is exposed clearly when he started debating with those who doesn’t even know anything about Dr. Zakir Naik.

It is said in Hindi “Kutta bhi apne ilakhe mein sher banta hai” (Even dog becomes lion in his area). I openly challenge you Mr. Arnab to have a debate with me on the same topic. Only sitting in the studio and asking questions to the fans of Dr. Zakir Naik who cannot respond you while sitting at home. Is this an ethical journalism? You would have called them and asked in the studio in front of the Nation. Now Nation wants to know the answers to your allegations. Are you ready to take up the debate again? Brave men face the challenges while the cowards run. 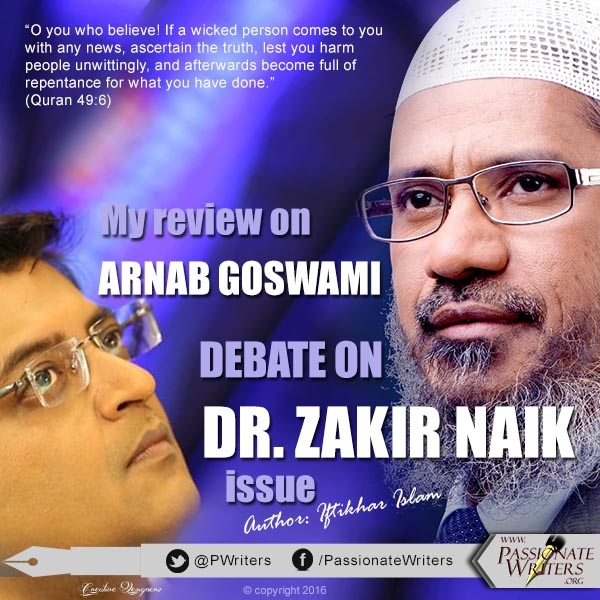 On the other hand Arnab is a self-claimed “honest” journalist. When Minakshi Lekhi, an advocate, accused Arnab of taking money, he got furious and said “Never ever make an accusation to an honest journalist”

Zakir Naik never supported Osama Bin Laden. He has neither spoken in favour not against him. He is a man who handles open Q&A sessions in which any person from the audience can pose any question on the subject of ‘Islam and Comparative Religions.’ When any one ask him about Osama Bin Laden he says I neither believe him to be a saint nor terrorist. I haven’t met him. Media can turn hero into villain and villain into hero. He is just silent on the issue because the Quran says “O you who believe! If a wicked person comes to you with any news, ascertain the truth, lest you harm people unwittingly, and afterwards become full of repentance for what you have done.” (Quran 49:6)

Regarding the statements Arnab Goswami quotes of Dr. Zakir Naik, it is out of context and more than a decade old. If you see the video completely you will get to know what Zakir Naik wants to say.

When Zakir Naik did said 9/11 is an inside job? Watch his (all-time favourite) video on the topic “Is Terrorism a Muslim monopoly?” you will get the complete understanding of what Zakir Naik said about 9/11. He just quotes the people who says 9/11 is an inside job. So according to your logic the government should also restrict even those people from addressing public gatherings?

Even if Dr. Zakir Naik says 9/11 is an inside job, what is wrong in it? Haven’t you researched about 9/11 yet? If no, then it is embarrassment on us having this kind of un-researched journalism in our country. Shame on you to claim having “investigative” journalism.

Just for a hint, study about False Flag Operations. I feel sorry to give an advice to a high caliber journalist of the nation.

Arnab feels “strange and ironical” when Zakir Naik says singing Vandemaratam goes against Islam and Hinduism. This shows how ignorant and illiterate Arnab is and how scholarly knowledge Zakir Naik possess. What Arnab knows when it comes to Islam or Hinduism? He just knows to shout and scream.

Dr. Zakir Naik provokes audience:
Arnab said, “I think he is saying the things deliberately to provoke the audience because that brings him viewer[ship]”. I can just laugh on Arnab’s analogy. How many lectures Arnab have seen of Dr. Zakir Naik? Dr. Zakir Naik has debated many prominent personalities in the world. Even after the debates nothing has happened. If Zakir Naik would have provoked the audience, then there would have been protests against him immediately. Why there are protests now, for those words he uttered more than a decade ago, and that too quoting him out of context. The reality is that people are accepting Islam openly in his programs that seems to be danger for them in the future.

You need to understand the meaning of ‘venom’. By the way in which school have you studied Arnab? Who has appointed you in Times Now? What you do at 9 pm daily in your studio? Do you spread love? You spread brotherhood? What you do in the studio is venom. You speak those things which even you – if you sit quietly – ponder upon it, you will laugh on yourself.

“Let’s come to the common term first”, “Go back to the scriptures”, “Believe in one God” are these statements venom? After the debate, in the concluding sessions he say “I was just replying to allegations, I am not here to hurt the sentiments of the people” even this is venom? “I don’t know who Osama is, I have never met him… I cannot say whether he is a saint or a terrorist”, “When you get the news verify it”, even now he is speaking venom? When the media asked him about Sadhvi Pragya Singh, he said the same thing “I don’t know who Sadhvi Pragya Singh is, I cannot say whether she is a saint or a terrorist” Do you mean to say these sentences are venom as well?

Arnab says he didn’t even want to quote what Zakir Naik has said about Shiva and Ganesh. Why didn’t Arnab quote Zakir Naik on this issue? He very well escaped saying, “you want to me repeat what he says in the context of Shiva and Ganesh, I won’t repeat it.” Why?

The explanation Zakir Naik has given is in the context when non-Muslim friends and neighbors force or offer Muslims to eat Prasad. In answer to this he gave an example of Shiva and Ganesh and ask them to prove that ‘Shiva is God’ then we will eat ‘Prasad’. Because Muslims cannot eat those food on which anyone’s name is taken besides God. Even if anyone has taken the name of Prophet Muhammad (peace be upon him) on the food, the food becomes prohibited for the Muslims.

In the context to explain that Muslims won’t eat food which is offered to any deities beside God, he narrated the story of Shiva and Ganesh. If it is false, then correct Zakir Naik with true version of the story. Dr. Zakir Naik is open for correction. The narration is only for the sake of knowledge, not to degrade or hurt anyone. Dr. Zakir Naik often quotes this ayat (verse) of the Quran which says “Revile not ye those whom they call upon besides Allah, lest in the ignorance they will revile Allah” (Quran 6:108)

If the true story hurts you then stories and films should hurt you more. Those who write stories and make films should be restricted from making more films. The Director of the film ‘O My God’ Umesh Shukhla; and Producers Akshay Kumar, Paresh Rawal and Yashvini Yardi; should be banned for showing all those stuffs in the movie. The team of the film ‘PK’ – Rajkumar Hirani, Vidhu Vinod Chopra, Abhijat Joshi, Aamir Khan, Anushka Sharma and others – should be restricted from making more films.

Why only target Zakir Naik and leave others? Only because Zakir Naik is a Muslim? Or more and more people accept Islam in Zakir Naik’s gathering?

This is a brief response to some of the allegations which Arnab has deliberately put on Dr. Zakir Naik. I could have given point by point refutation to Arnab Goswami. I don’t want the response to get lengthy. There are many illogical and nonsensical statements given by him which I thought of not worth responding.

Before concluding the response, I would like to throw some light on how Arnab fools the viewers:

Does this section fits Zakir Naik in ANY manner? I hope Arnab understands these simple words of the section. You don’t have to be a lawyer to interpret this section and apply on Dr. Zakir Naik. The other sections of IPC and CrPC and Article 19 (2) of the Constitution of India is subject of discussion when it comes to application on Dr. Zakir Naik. Being a student of Law, I can just laugh on Arnab.

Arnab lacks research:
By quoting unwanted section for Dr. Zakir Naik, he showed the level of research he has. The other allegations and sentences he quoted against Zakir Naik has already been answered by Dr. Zakir Naik before and relayed on Peace TV multiple times and available on YouTube. The allegations are taken from a decade old tapes which Zakir Naik already answered in his new tapes.

If you want to know about Dr. Zakir Naik in the right perspective, then watch his videos for yourself (here: www.youtube.com/DrZakirChannel) and you be the judge whether Zakir Naik is the prince of peace or preacher of hate.